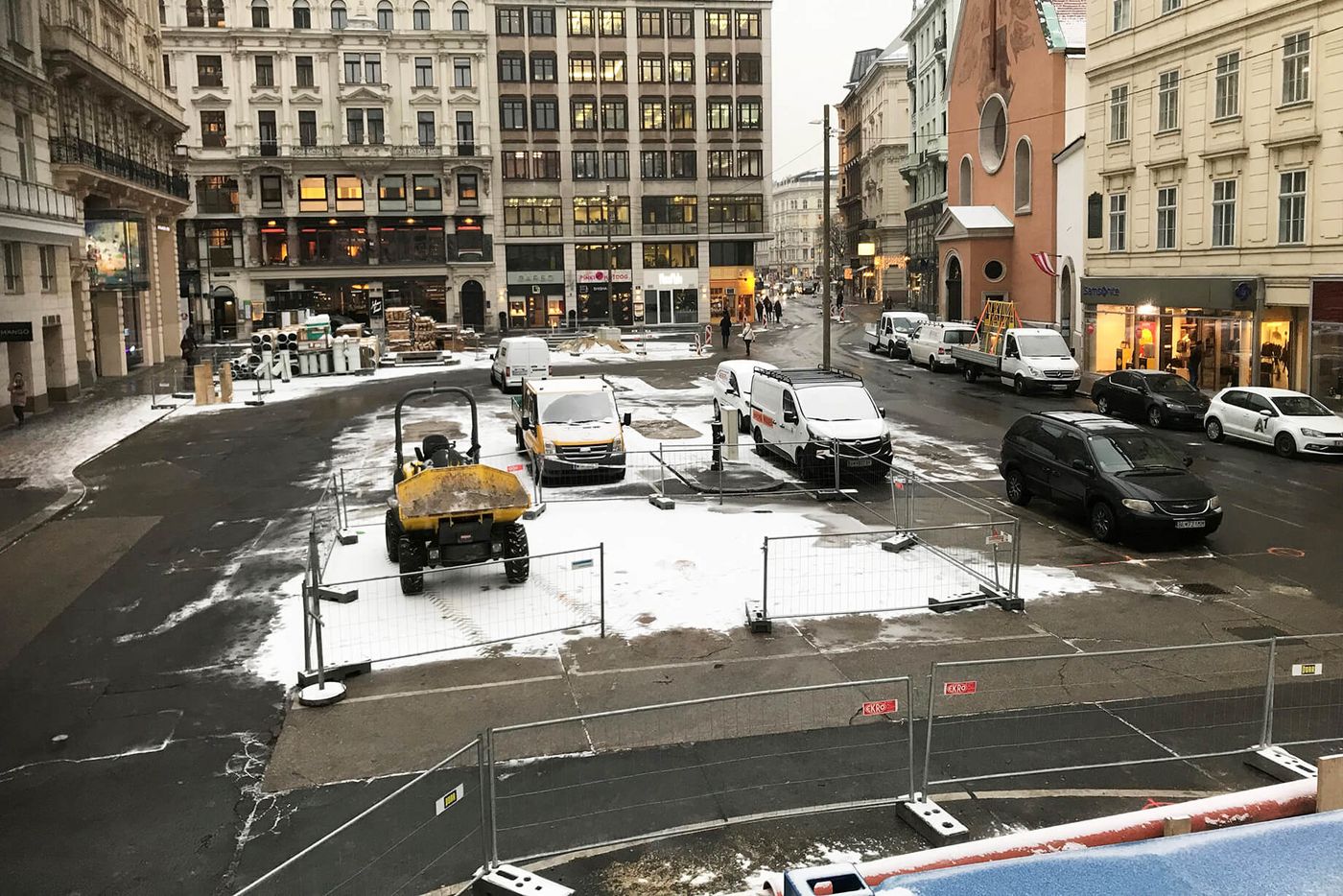 Large-scale utilities reallocation in the centre of Vienna.

In December 2018, WIBEBA received the contract to implement all utilities for the new underground parking garage in Neuer Markt in the Vienna city centre. The historically significant construction site required facilities for sewerage, district heating, gas, water, electricity, telecommunication and internet to be installed. Works began on 7 January 2019. Since the lines could only be laid in their final positions once the underground parking garage was complete, the WIBEBA team had to construct temporary installations in some cases.

The new underground parking garage project was much debated from the start. The site presented great challenges for affected neighbours and shopkeepers, as well as for the companies involved. Several organisational hurdles had to be overcome in advance of the actual construction, such as the development of a suitable traffic plan. And the urban archaeologists of Stadtarchäologie Wien were also present on the construction site from the very beginning. The centre of Vienna came under heavy bombardment during the Second World War. As a result, the site had to be explored for explosive ordnances with a magnetometer and ground radar before construction works could begin.

While all installations such as benches, bicycle stands, lampposts and advertising billboards were being removed from the former site of the famous Donnerbrunnen fountain, we began constructing a container tower. First, we laid the water and gas mains in a double trench. At the same time, we began work on the new telecommunication lines. The limited space on the site made it particularly difficult to lay these lines. In addition, the new line ran along the pavement right next to the planned bored piles. The soil in this area contained both defunct and currently used lines. Thanks to the experience and expertise of our team, we were able to successfully overcome these hurdles and subsequently begin working on the sewerage and district heating lines.

To lay the district heating pipes, our team constructed eight new shafts in the form of waterproof “white tanks”. To ensure that the supply of district heating to the adjacent buildings was not interrupted, we erected two steel scaffolds to temporarily support the lines. As the hot water flows through the pipes at over 100 degrees Celsius and with pressure of more than 20 bars, great care was needed in calculating the structural engineering requirements and erecting these systems.

Rocky outcrops interrupted the progress of the sewer trenches, and these had to be chiselled away with great care. A bypass was constructed to enable the sewerage system to continue operating without interruption. As soon as the entire new sewer construction was laid and complete, including newly constructed cleaning shafts, we were able to connect the new sewers to the old system.

The immediate area around the construction site also presented a great challenge. Uninterrupted access to neighbouring shops and businesses had to be ensured throughout the entire construction phase. The WIBEBA team worked together with the police to establish a traffic management system for cars and pedestrians. Owing to the long time frame of the project, this traffic management plan required the demolition of traffic islands around the construction site and the installation of new traffic signage and road markings.

In addition to the challenging surroundings and complex conditions faced by the team, it was essential to optimally coordinate individual works with each utility to avoid collisions. Temporary adjustments were frequently required when the team of archaeologists encountered historic artefacts such as wall sections, broken fragments or even skeletons. Short-term adjustments to plans and considerable flexibility were required to compensate for the resulting downtimes.

We relocated a total of eight district heating shafts and 14 sewer shafts, and demolished and recycled 300m3 of asphalt and almost 400m3 of concrete. Some 4,400m3 of material was excavated from the individual trenches and shafts. Our works on the project are still not completely finished. Once PORR has completed the construction of the underground parking garage, we will be able to finalise the utility installations.

Our team designed a traffic routing plan that required the demolition of traffic islands and the construction of permanent traffic signposts and road markings. 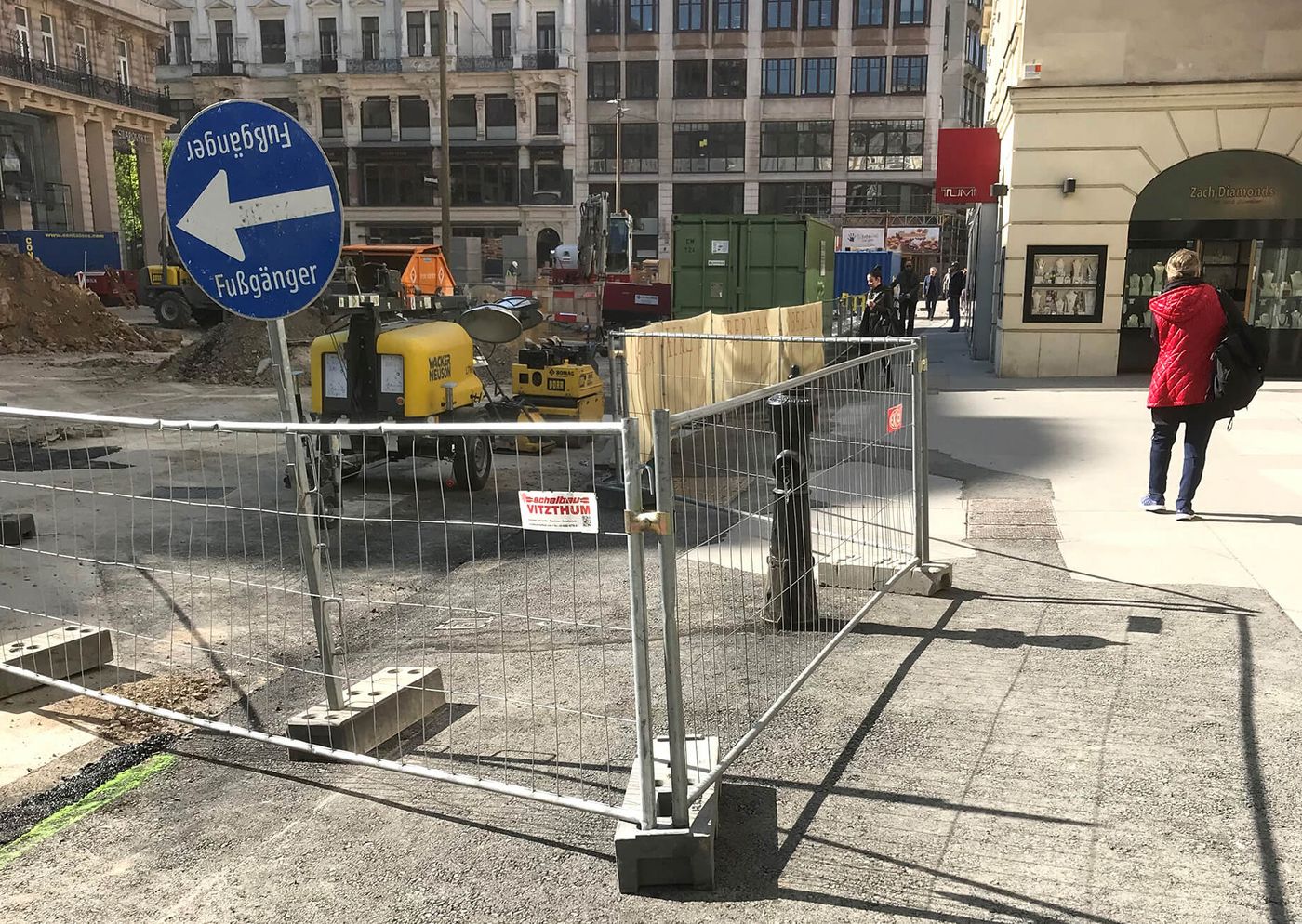 Over 1,000m of temporary fencing was used on the construction site. 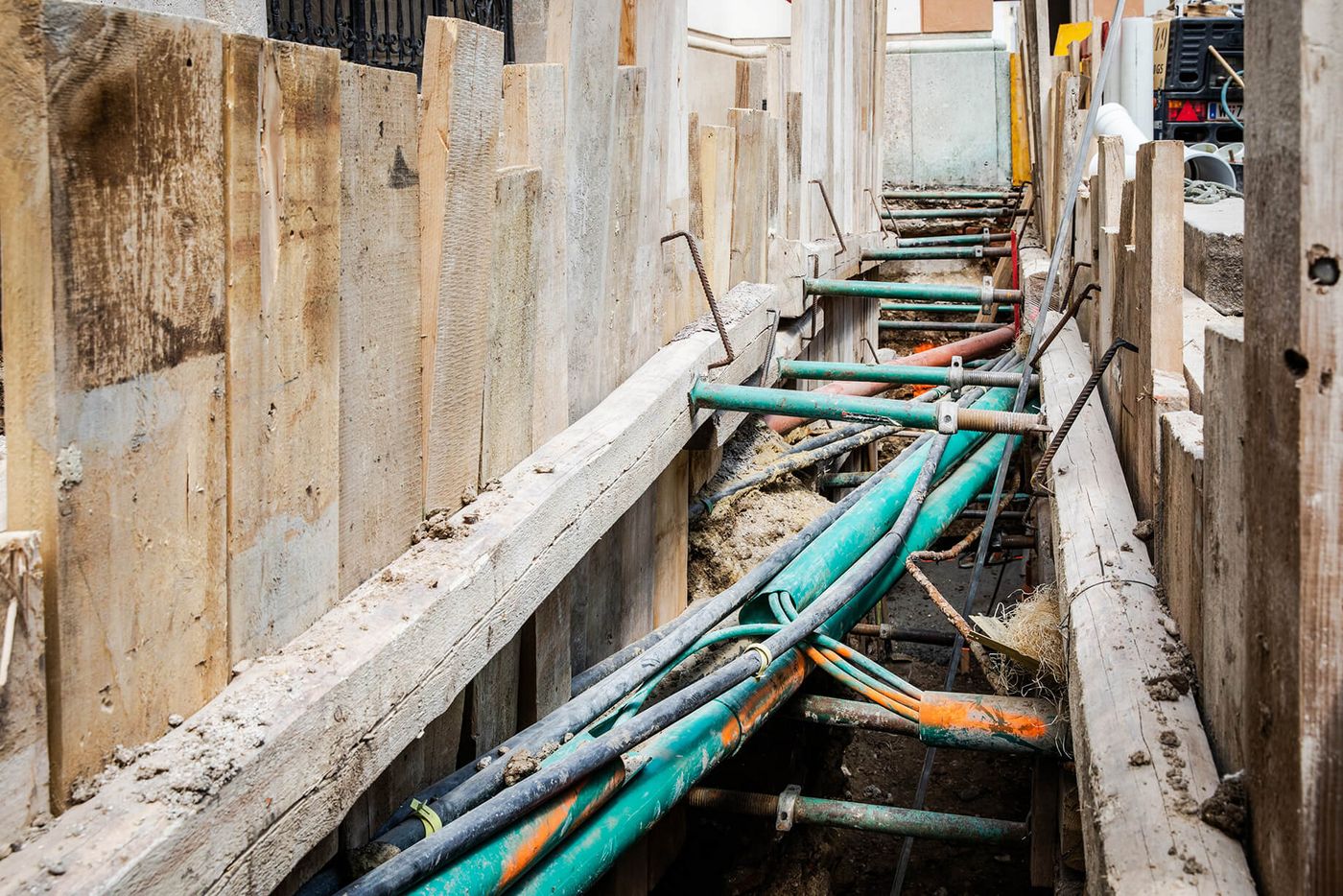 During the construction works, we installed more than 5,300m2 of shoring and constructed eight district heating and 14 sewer shafts.

© PORR
Print project
Back to overview